The mother of a Buffalo, N.Y., mass shooting survivor testified before Congress on Wednesday that America is “inherently violent,” telling lawmakers, “This is who we are” as as a nation dating back to the introduction of slavery.

Zeneta B. Everhart, a Buffalo native, former television news producer and currently director of diversity and inclusion for the office of Democratic New York State Senator Tim Kennedy, told the Oversight Committee and of House reform receiving his son’s call that he had been shot on May 14.

Everhart argued that “the very existence of this country was built on violence, hatred and racism, with the near annihilation of my Indigenous brothers and sisters”.

A person walks past the scene of a supermarket shooting in Buffalo, NY
(AP Photo/Matt Rourke)

“My ancestors, brought to America through the slave trade were America’s first currency, let me say again for the people in the back, my ancestors, America’s first currency were stripped of their heritage and culture, separated from their families, auctioned off, sold, beaten, raped and lynched,” Everhart said. “Yet I continually hear after every mass shooting that this is not not who we are as Americans and as a nation. Listen to me clearly, this is exactly who and what America is.”

“As a citizen of this country, I believe in the Second Amendment and the right to bear arms. However, no citizen walking the streets needs an AR-15,” she added. “Let me repeat that for the people in the rear. No citizen needs an AR-15. These weapons are designed to do the most harm in the least amount of time.” 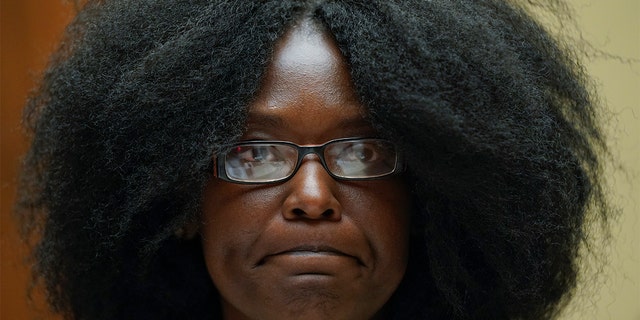 Zeneta Everhart, whose son Zaire Goodman, 20, was shot in the neck in the Buffalo Tops supermarket mass shooting and survived, testifies at a House Oversight and Reform Committee hearing on gun violence on Capitol Hill in Washington, Wednesday, June 8, 2022.
(AP Photo/Andrew Harnik, Pool)

She called on lawmakers to enact “common sense” gun legislation to protect children and citizens.

“To lawmakers who feel we don’t need tougher gun laws, let me paint a picture: my son Zaire has a hole in the right side of his neck, two in his back, and another in the leg caused by an exploding bullet from an AR-15,” Everhart said. “As I clean his wounds, I can feel pieces of that bullet in his back. Shrapnel will remain inside his body for the rest of his life. Now I want you to imagine this exact scenario for one of your children. This should NOT be my life or yours.” 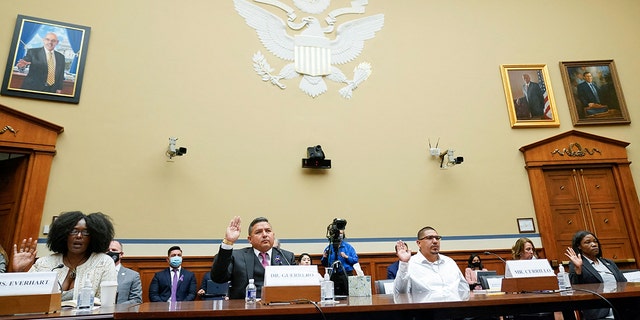 From left, Zeneta Everhart, whose son Zaire Goodman, 20, was shot in the neck in the Buffalo Tops supermarket mass shooting and survived, Roy Guerrero, a pediatrician from Uvalde, Texas, Miguel Cerrillo , father of Miah Cerrillo, a fourth-grade student at Robb Elementary School in Uvalde, and Lucretia Hughes of DC Project, Women for Gun Rights, are sworn in to testify at a House Committee on Oversight and Reform hearing in Washington, D.C. , June 8, 2022.
(ANDREW HARNIK/POOL/AFP via Getty Images)

Everhart recalled how a ‘racist terrorist’ opened fire at Tops Friendly Market in his historically black neighborhood on May 14 where his 21-year-old son Zaire Mysaun Goodman has been employed since the summer of 2020 when he took the job at the height of the COVID-19 pandemic.

She said she was shopping elsewhere at a BJ’s when Goodman called to say he had been shot, and her grandmother, who lived just down the block at the time, rushed over to see “bodies everywhere”.

But Goodman was already rushed by ambulance to Erie County Medical Center, where Everhart said she “begged the nurses to let me see my son.” Eventually, she and Goodman’s father were allowed to see him, and she said they “drove home from the hospital just four hours after a bullet passed through the lower right side of his neck and back”.

The shooting ultimately killed three people and injured 11 others, including Goodman.

Danielle Wallace is a reporter for Fox News Digital and covers politics, crime, policing and more. Story tips can be sent to [email protected] and on Twitter: @danimwallace.